Coloring books for adults: we asked therapists for their opinions 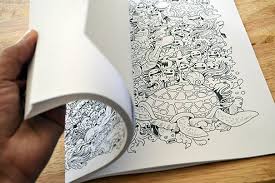 If you want to color, knock yourself out – believers say they are de-stressing and self-expressing but experts advise don’t call it meditation or therapy

Debra Dettone, a 52-year-old preschool teacher who lives in Harrison, Ohio, was having some anxiety over her job recently. Her doctor was concerned about her blood pressure. This week, she went back and got some good news: an improved reading of 120/84.

“[My doctor] said, ‘What are you doing?’ and I said, ‘A little bit of walking and I color at night,’” said Dettone over the phone, outing herself as an adherent of a suddenly trendy hobby – adult coloring.

“To unwind at night, that’s what I do,” Dettone said. “I’ll sit down for an hour or so and color a notecard or color a mandala or whatever. It helps me. It relaxes me. So I can go to sleep and start the next day.”

Chances are you’ve already heard it’s the year of the adult coloring book. Publications have touted the books’ ability to help adults “de-stress and self-express”. Coloring has been said to be able to help you achieve mindfulness, banish anxiety, and even deal with trauma. Some of the books explicitly label themselves as “art therapy.”

Is this trend as great as it’s cracked up to be? We asked some professionals.

Cathy Malchiodi, an art therapist, wrote critically about adult coloring. “Some people are adamant that coloring books are a path to mindfulness, meditation and some kind of psychological nirvana,” Malchiodi said over the phone. “I find that many of the loudest proponents are actually those that create the coloring books.”

Malchiodi admitted to finding the trend disappointing. “This year, there have been several really good studies about why people should engage in creative activity, which doesn’t involve coloring in someone else’s designs,” she said, citing a study that was released by the Mayo Clinic this spring. “It involves actually pursuing some form of art-making. It can be very helpful to people’s mental health and physical health.”

The gist of the criticism? If you want to color, knock yourself out, but don’t call it meditation or therapy.

Shannon Bennett, an assistant professor of psychology in psychiatry at New York’s Weill Cornell Medical College, says that “it’s not something that would be a go-to for me”.

Donna Betts, president of the board of the American Art Therapy Association and an assistant professor at George Washington University, agreed, adding she has never used coloring books in a therapy session, and would never consider it.

In her view, there’s a distinction to be made between coloring and actually creating art. “It’s like the difference between listening to music versus learning how to play an instrument,” Betts said. “Listening to music is something easy that everyone can do, but playing an instrument is a whole other skillset.”

Drena Fagen, an art therapist and an adjunct instructor at New York University’s Steinhardt School, has a rosier view of the books, and said she has actually used them in therapy sessions. Still, she makes a distinction between the books and therapy: “I don’t consider the coloring books as art therapy; I consider the coloring books therapeutic, which is not the same thing.”

Fagen said that the activity can be mindful or mindless, depending on how one approaches it. “Any creative endeavor that can in some way help somebody discover something about themselves or find a space that makes them feel safe and comfortable or allows them an opportunity to be with their own thoughts, I don’t see how we can criticize that. It seems like it’s only bringing good things to the world.”

Bennett echoed Fagen, saying that although there isn’t “the research support for coloring specifically” as a treatment, it can be part of a larger plan for coping with uncomfortable feelings.

And people who color certainly see the activity as relaxing, stress-relieving, all of the above.

Paula Meng of St Petersburg, Florida, colors for several hours a day. The 52-year-old finds that it helps to alleviate her anxiety, depression, and back pain. “It helps me,” she said. “Your mind is blank other than what you’re doing at that very moment.”

“If you ask any colorist, they’re going to tell you that it’s therapeutic,” said Cari Schofield, 38, from Stockbridge, Georgia. Schofield, who has been coloring for about three months, also takes issue with the criticism that coloring is not creative. She has epilepsy, and said she used to enjoy drawing and painting, but “my epilepsy got to the point where anytime I would try to focus on doing things like that, my hands would start to jerk”, she said.

Because of coloring, however, she’s drawn again for the first time in a long time, using Johanna Basford’s books, which include blank spots where the author encourages people to add their own elements to scenes.

“I just recently drew a mushroom that has this little mushroom fairy on it. It took me a while because my hands were jerking, but it turned out really good,” Schofield said. “I’m really proud of it.”

2 responses to “Coloring books for adults: we asked therapists for their opinions”